Is Starbucks starting a war on Christmas? 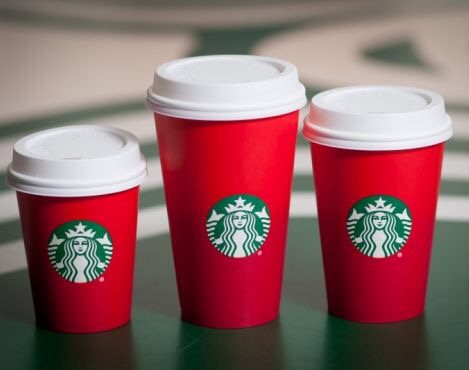 It’s that time of year again – red Starbucks cup season. In case you’re unaware, every November Starbucks issues a red cup that signifies that “pumpkin spice season” is winding down and “peppermint season” is on its way.

This year, however, Starbucks’ more simplistic design has some people in an uproar. A man by the name of Joshua Feuerstein recently issued a video that claims “Starbucks removed Christmas” from their cups and condemning them for doing so. The video has gone viral on social media, gaining over 8 million views (and counting).

But is any of this even remotely true?

Starbucks tells a different story. In a news article on their website, Starbucks vice president of Design and Content Jeffrey Fields explains the design decision. “Starbucks has become a place of sanctuary during the holidays,” he said. “We’re embracing the simplicity and the quietness of it. It’s [a] more open way to usher in the holiday.”

In the past, Starbucks has offered cups with holiday-themed illustrations – snowflakes, doves, snowmen, reindeer, trees, and so forth. Those symbols aren’t inherently Christian, and many of them don’t even represent Christmas at all. Some, like the original 1997 “Jazzy Santa” holiday cup design, are more closely representative of Christmas, but only its secular elements. As a New York Daily News article illustrates, Starbucks has been taking their cups in a more minimalistic direction since 2013, as the past three designs have featured shades of red only.

From a design perspective, this choice is not surprising. Design has taken a turn toward minimalism for the past several years, as best illustrated in Apple’s somewhat abrupt shift from skeumorphism in iOS 6 to a flat design in iOS 7, which released in fall 2013.

Design choices aside, the so-called “War on Christmas” presents a twofold message for Christians.

First, if a “war on Christmas” is seen as an effort to eliminate the secular symbols of the holiday, you’re engaged in the wrong battle. Starbucks has never featured a nativity scene, star of Bethlehem, or other inherently Christian symbol on its holiday coffee cups. Other designs featured Christmas-related images, such as Santa Claus or reindeer, but these symbols have nothing to do with the birth of Jesus or the actual “true meaning” of Christmas. That said, how is it any more “Christian” to feature Santa on a cup than it is a plain red design?

Second, it’s important for Christians to consider a proper Christian response to situations such as this. Jesus taught what is known as the “Golden Rule” in the Sermon on the Mount: “So in everything, do to others what you would have them do to you, for this sums up the Law and the Prophets” (Matthew 7:12 NIV). Applying this test to an approach to the holidays, what would happen if a different holiday had previously been featured? If Starbucks was Jewish-owned and featured dreidels, menorahs, and other strictly Jewish symbols on their cups, how would Christians respond? My guess is an outrage would ensue. Not only would this be a “War on Christmas,” but replacing Christmas with another holiday would likely take the battle further.

From a business marketing standpoint, it doesn’t make sense for Starbucks to theme their cups around only one holiday anyway. Creating cups with a drawing of baby Jesus on them could offend non-Christian customers (not to mention that such a trivialization might offend some Christians as well) in the same way that dreidel-bearing cups could offend non-Jewish customers.

Just because Starbucks is not an inherently Christian company does not mean they are fighting a “War on Christmas.” The fact that they create special cups at all, designed with a red-and-green color scheme that traditionally represents Christmas, is a subtle way of paying homage to Christian customers and others who celebrate Christmas without offending others.

Perhaps, Christians should focus on “keeping Christ in Christmas” by focusing on what is far more important during the holiday season. Instead of fighting over coffee cups, follow the words of the Jesus we honor at Christmastime: Love your enemy, care for widows and orphans, go the second mile, forgive others, care for the poor, love your neighbor, and bring hope to those who so desperately need it.