Is God in control?

It’s what many said when hurricanes threatened the Northeast this year and devastated the Gulf Coast region a few years ago. It’s what many Republicans said when Barack Obama was elected President. It’s something many say after a car wreck, relationship break-up, or hospital visit. Maybe you’ve said it yourself. Even if not, you’ve probably heard it. It’s a common response to evil, misfortune, or uncertainty: “God, we know you’re in control.”

We Christians seem to love this phrase whenever something doesn’t go precisely as we would have designed it. But what does it mean, and when the rubber meets the road, do we truly believe it?

I’ve discovered a lot of the discrepancy with this phrase stems from different understandings of the word “control.” In fact, it’s a means of division between many Christians. How you understand the meaning of control often can say a lot about what and how you believe.

So let’s get to the bottom of this and answer the big questions. What do Christians tend to mean when they say “God is in control?” Which definition matches most closely with what the Bible teaches? And perhaps most importantly, how do we live as a result of the previous two questions? Today I’ll address the first. Look for follow-up posts about the second and third questions soon.

When I was a kid growing up in Nashville, I loved going to Opryland theme park. Unfortunately, the owners of the park got greedy, electing in 1997 to tear it down to build a mall because it wasn’t making enough money. Nashville has several nice malls. It only had one theme park. It was a bad decision.

Anyway, Opryland didn’t have as many roller coasters as some of the major parks (Disney World, Six Flags, etc.) but it had a few great ones. My favorites were the Hangman, a coaster in which your feet were left dangling during the ride; the Wabash Cannonball, the first corkscrew coaster I ever rode; and as a child, the Tin Lizzies. They removed this attraction in 1995 to make way for the Hangman, but when I was young, the Tin Lizzies was one of my favorite things to do at the park. This wasn’t a roller coaster. Instead, it was a little concrete track on which you could drive (albeit slowly) cars resembling Ford’s Model T. Obviously, my fifteenth birthday (and subsequently obtaining my learner’s permit) removed the need and desire for the Tin Lizzies, but as a young boy I loved driving those cars. My parents also loved it because they knew it was safe. A metal rail ran in between the wheels of the cars, keeping them on the track no matter how badly the driver steered. This is what enabled a six-year old boy to sit behind the wheel of a “car” without having to sign a liability waiver. It was great for everyone.

So what does my reminiscing about riding roller coasters and driving at 5 miles per hour have to do with how God controls things in the world? I’ve been trying to come up with a simple metaphor to explain different views of control, and the best example that comes to mind is found at Opryland.

A roller coaster at Opryland

Some people think of God’s sovereignty (another word for power or authority) much like a roller coaster. Life is full of twists and turns, and sometimes it may give you a funny feeling in your stomach. You may even feel like you’re upside-down. But the path has already been laid out for you. No matter what you do as a passenger on a roller coaster, you can’t alter its course. Similarly, those who hold the “roller coaster” view don’t believe we have any active part in God’s plan. God lays out the pathway, and we simply fasten our safety harness and hang on for the ride. God being “in control” means that God actively controls every detail of life. What you eat for breakfast, the clothes you wore today – it’s all part of God’s plan laid out for you. Some but not all Calvinists hold this view, and it is distinctive from Calvinism. It is commonly called hyper-Calvinism. 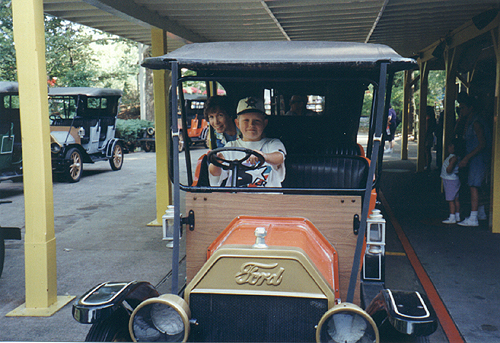 The Tin Lizzies (that’s not me in the picture!)
Photo credit: Ernie Brach/Brach Photography

Others view sovereignty more like the Tin Lizzie attraction at Opryland. Much like the metal rail that keeps the cars on track, God exercises a certain degree of control. But the difference is that the Tin Lizzie view allows for a degree of flexibility – what we call free will. Those who view God in this way believe that God allows us to make decisions and God holds us responsible for the choices we make. While the degree of free will we have is often a source of debate, Arminians and many Calvinists alike hold this view.

So which definition of control most closely resembles the teachings of the Bible? What do these definitions mean for us, and how do they affect our understanding of God being in control? Stay tuned!

In the mean time, what are your thoughts on the two definitions of control? Which one most closely resembles what you understand God to be like?

Update: Continue reading part two of the “Is God In Control?” series here.